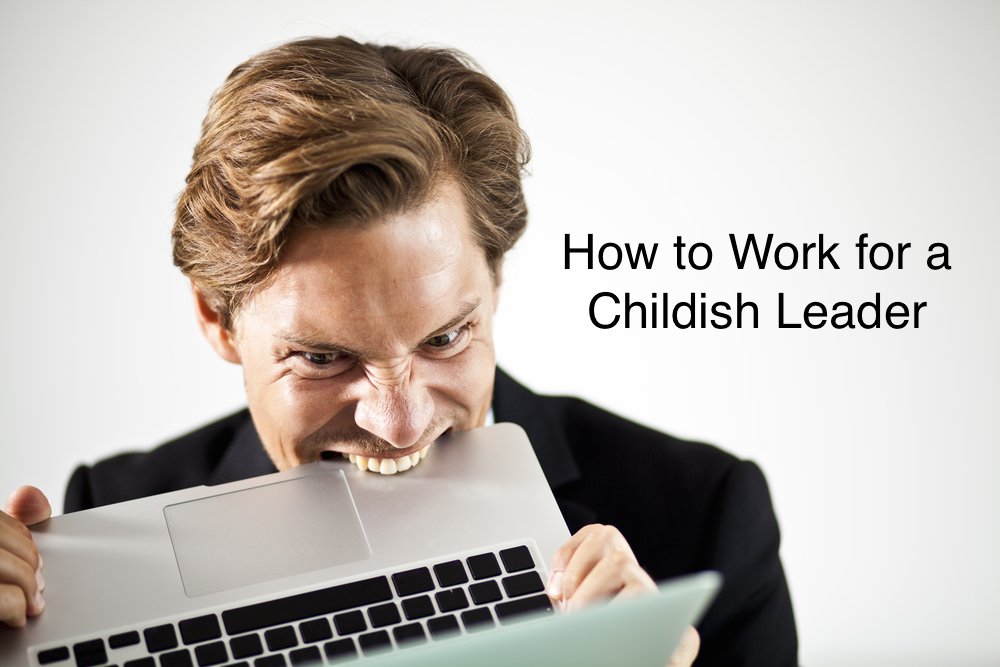 Childish leaders. My friend and leadership expert Vince Molinaro describes them as infantile, immature people who happen to wear suits and sit in corner offices.  As Vince says “They have the emotional maturity of a two-year-old, so when they don’t get their way they have a temper tantrum.” As with two-year-olds, they haven’t quite figured out that the world doesn’t revolve around them.

There isn’t much good news about working for an infantile leader.  Like a child, you never quite know what to expect.  The most inane things set them off and, until they calm down, there’s nothing you can accomplish. The good news is that parents have been dealing with the terrible twos for millennia, so we have a few tricks we can borrow.

If you are able to get up and leave the situation without being chased, chastised, or fired, then retreat.  If you can’t walk away physically, walk away mentally.  If it helps you stay psychologically detached, try discretely timing the tantrum and keeping your own Guinness World Records.  Or come up with your own classification scheme to code the different episodes—DEFCON 2, 3, or 4.  The purpose is not to share these or to use them against your boss; the purpose is to keep you calm and get you through the worst of the yelling.

When I was parenting two-year-olds, I found great comfort in commiserating with other people in the same boat.  The same holds when you have a childish boss—or any terrible boss for that matter.  It’s important to find sanity and support elsewhere.

The good news about working for an infantile leader is that most people will have seen the bad behavior and know what you’re up against. Find solace in your teammates and use your boss as an excuse to get really in sync with one another.

There are a couple of good reasons to reach out to other leaders beyond your team too: First, you can validate the instructions you’re getting and see if they jive with what others are expecting; second, you can ask for coaching about how to work most effectively with your boss.  This will probably yield a few tricks but also alerts others to the problem.

Like two-year-olds, infantile leaders tend to be very in the moment and highly emotional. That means their memories aren’t the best.  But unlike with two-year-olds, with an adult, you can document everything.  When you get a decision or direction from your infantile leader, walk directly back to your desk, (in Monopoly parlance, do not pass GO, do not collect $200) and craft a brief email describing the instructions as you heard them.  If possible, ask for an acknowledgement that you have it right.

If at some point your actions are called into question, go back to the email.  “I understood from our discussion that my marching orders were x, y, and z.  What’s causing those priorities to shift?” You’ll probably get yelled at, so you might need to anticipate the DEFCON 3 response in advance to neutralize its impact on you.

Working for an infantile leader is exhausting and can only be sustained for a limited period.  If there is no hope in sight, you have to make a serious choice about your career and your health.  In the short term, the secret is compartmentalizing and not letting your boss’ terrible behavior affect your own self-confidence.  Again, the tantrums are a reflection on your boss, not on you.