How to work for an insecure boss 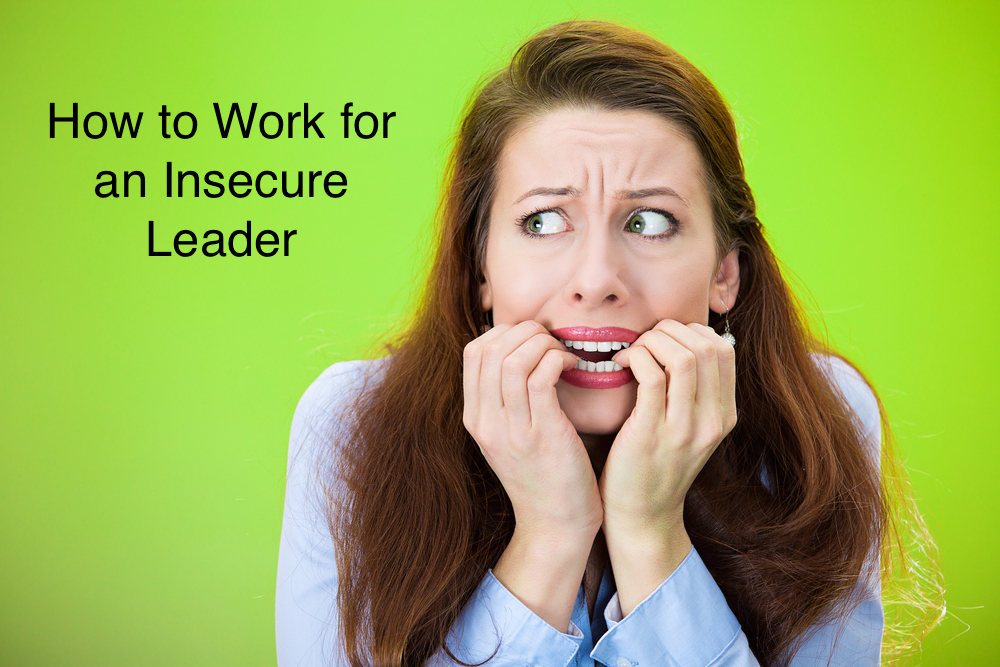 Insecure bosses. My friend and leadership expert Vince Molinaro describes them as leaders whose lack of self-confidence affects everything they do. As Vince says “They don’t trust others. They hire weak talent. They are the control freaks in our lives. They play mind games with their employees.” They probably need proper therapy, but there’s not much you can do about that.

Do You Have an Insecure Boss?

Of all the bosses I’ve had in my career so far, the two insecure leaders I worked for accounted for five of the worst years of my life. One reason for that is that insecure managers are entirely unpredictable. If you catch them in a moment when they are feeling confident, they can be friendly, capable, and supportive. But the moment something triggers their insecurity, watch out! That’s when they get defensive, vindictive, and petty. It’s not going to be fun, but here’s what you can do.

If you’re working for an insecure boss, you’re going to get yelled at, set straight, and micromanaged. Your first reaction might be to see this as a reflection of your lack of ability. When you question yourself and wonder what you could possibly be doing wrong, don’t exclude the possibility that the only thing you’re doing wrong is threatening your boss with your strong performance. Having the right mindset and staying centered in your own self-esteem is critical. Let me say that again, never let a boss rock your belief in yourself.

Triggering your boss’ insecurity is only going to create misery for both of you. Instead, find ways to let your boss feel that they are in control. Where you have success, make them a part of it. “Thanks so much for the discussion last week; it really got my ideas flowing.” Where you think change is necessary, use language that shows you respect your boss’ power and position. “We need to change how we interact with the marketing team. How are you thinking about our relationship with them?” “What do you see as the biggest opportunities to change things for the better?”

If you’re stuck with an insecure boss, you’re not going to be able to go to them with all your whiz-bang ideas for how to make things better. Insecure bosses tend to like the status quo because at least they know they can keep their heads above water in the present scheme. But shutting off your brain for a couple of years isn’t the answer. Instead, find sponsors in the organization who will include you in other forums and projects.

Build Your Own Reputation

I hate to say it, but building these relationships isn’t just about flexing your brain every once in a while. Your insecure boss might be downplaying your strength to their boss and in talent reviews. That’s why it’s important for you to have your own relationships with key stakeholders. Be careful though, your participation outside the team will feel threatening to your boss so you need to keep them in the loop.

In the end, the best leverage you have over an insecure boss is to make yourself indispensable to the organization. If you do that, your boss will know they’re safer with you than without you—and that matters to someone who is insecure. As long as you’re willing to share the spotlight and reflect some of your success, your job will be unpleasant but secure.

I have to empathize that working for an insecure leader is almost as bad as it gets. You’re trying to maintain your own self-esteem in the face of continual attempts to undermine it. At the same time, you’re trying to feed the insatiable beast that is your boss’ fragile ego. I’m not sure this situation can be tolerated over the long haul, but these techniques should calm things down and make your insecure boss bearable for a while.