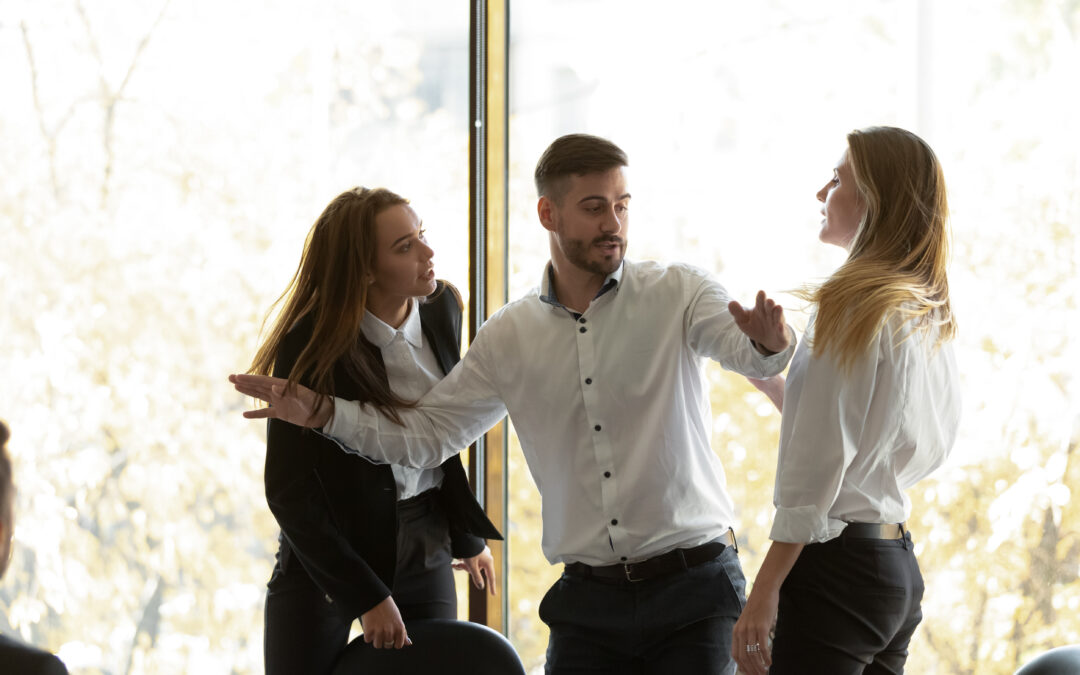 You could probably benefit from more conflict in your life.

Does that sound strange? Backward? Misguided?

I’ve spent 15 years advising teams, and 90% of those teams started performing more effectively when they had conflict more frequently. And as the team members learned to use conflict resolution to improve their productivity, strengthen their relationships, and decrease their stress, many of them reported back that the techniques were equally, if not more, essential at home.

I define productive conflict as a conflict that moves you forward. It unlocks something. Productive conflict first generates insight, then creates possibilities, and concludes with action. In the process, productive conflict strengthens relationships because it opens a line of communication and strengthens the connection between you. And each time you broach a contentious topic and work your way to the other side of it, you also bolster perceptions of psychological safety. The truest and most robust form of psychological safety is not knowing that your team will never fight—it’s knowing that your team can fight and come out the other side unscathed.

There are a few hallmarks of healthy conflict. Here’s what I see in a conflict that gives me comfort that there’s a path through even the most contentious discussion. 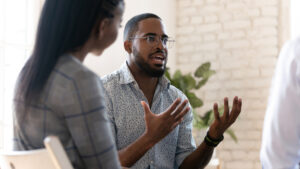 You know that old phrase in real estate that the three most important things are “location, location, location?” Yeah, well, for conflict, I’d go with “listening, listening, and listening.” I’m astounded (really…gobsmacked, floored, flummoxed) by how many conflicts I observe resulting from two people not listening to each other and therefore not getting to the root of the problem. Each time one person misses what the other was trying to say, the intensity (and volume, and frustration) increases, making it less likely that either is going to listen to what comes next.

Take a look at these instructions for what I call “Level III Listening.” Use this approach, and you’ll avoid the majority of conflicts and blaze a path through the rest.

Useful, healthy, constructive conflict is full of questions. Questions show that you are eager to learn how the other person sees or interprets the situation. At first, use primarily open-ended questions to expand and deepen the conversation. Open-ended questions, particularly skillfully crafted broad questions, are like blank canvases. How the person chooses to interpret and answer the question gives you rich information about what they value—and understanding what they value is the secret to finding a solution that will work for them. Then, once you’re narrowing in on a solution, use closed-ended questions to lock in the commitment.

Another sure sign that a conflict is making things better is when you start to understand and empathize more with the other parties to the conflict. After each open-ended question and its illuminating answer, you have a slightly different perspective on the problem. You’re learning about the challenge from the other person’s point of view and, in the process, getting clues about where the solution might lie. The result is that your suggestions evolve and have a sense of momentum toward a resolution.

I wouldn’t want to create a list of the characteristics of productive conflict and leave off issue-focused. Issue-focused means that when you’re talking about someone else, you avoid the emotionally laden drama of adjectives like, “this is too rushed,” or “this plan is doomed.” Instead, you talk about the realities of the situation (using verbs and nouns) like “You think a September launch won’t work,” or “You believe that we don’t have sufficient resources allocated for marketing.”

If you want productive conflict, focus on the merits and drawbacks of the proposed ideas rather than the traits or behaviors of the people around the table.

While your comments about other people and their ideas must remain as objective as possible, productive conflict is full of moments when you share your desires and fears openly. If deep-seated values and beliefs underlie your positions, it’s courageous and valuable to be transparent about them. For example, you might say something like, “I want to get behind this new plan. I just can’t shake the feeling that I’d be betraying all the people in my team who I sold on the current plan only six months ago.”

When you get these values and beliefs out in the open, it’s easier to know what you’re working with and much more likely that you’ll find a solution that works for you.

Productive conflict uses only what you can see from others and shares everything they can’t see about you.

Signs Your Workplace Conflict is Unhealthy 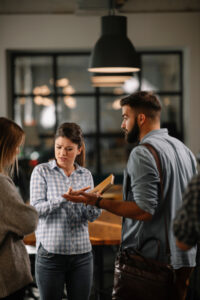 It’s easy to imagine what unproductive conflict looks like. It’s the opposite of all the things that make conflict healthy.

Here are a few signs that your conflict has turned unproductive.

There are many more signs. What would you add?

How to Fix it if You Mess Up

Let’s be fair. When you’re fighting about something you’re invested in, an issue with high stakes and strong emotions, it’s super-duper difficult to be constructive. I get it.

That means sometimes you’re going to start checking off those unproductive signs as if you were racing to win Conflict BINGO.

If it happens, stop as soon as you notice that you’ve lost the plot. Stop. Exhale.

Now, say something to let everyone else you know that you realize you had temporarily been inhabited by a banshee. Take your pick. Go with a nice loud, “crap,” or “sorry,” or “I need a sec’.” The point is to break the pattern and signal to everyone that you’re now in on it.

Then reset. If you’re ok to continue in the moment, try, “I wasn’t listening. Would you take me through your concerns again, please?” Alternatively, go with, “That’s not how we’re going to get to a resolution. I’m sorry. Could we go back to what we’re trying to solve for?” Recommit to engaging in the conversation in a healthy and constructive way.

If you’re not yet calm enough to continue, you might be able to defer the conversation. If so, ask for an adjournment. If you aren’t in a position to postpone the discussion, pull back and give yourself a few minutes to settle. Try taking some notes about what people are saying to key in on what you’d been missing.

Later, find an opportunity to acknowledge that you weren’t at your best. Be vulnerable about what was going on. If you can get the word “sorry” to come out of your mouth, great. If you just can’t spit that one out, try thanking people instead. “Thanks for bearing with me while I lost my nut yesterday.” If you have something constructive to offer, that would be a good fit. “Before we dive back into finding a solution, could we take a few minutes to talk about what we see as the problem. I think we might be trying to solve different things.

Let’s make that a little easier to follow… When you behave poorly in a fight, do these things:

[As a career-long consultant and lover of all things words, it’s killing me that this isn’t a nifty acronym. But man, do I hate a trite acronym where people bastardize the parts of speech or highlight the second letter to make it work, so can we forego the abbreviation?]

Getting good at having productive conflict means you can get out of conflict debt and avoid the profound costs of conflict avoidance. Try it the next time a discussion gets heated.