Are you ever tempted to keep your mouth shut rather than start an argument? Do you think to yourself that it would be easier to agree to disagree so that you can keep moving, maintain harmonious relationships, and avoid triggering one of Susan’s epic hissy fits?

Getting embroiled in a fight at work can suck.

The only problem is that you can’t get out of a fight until you get into it. And the alternative to getting to the other side of a conflict is to be held hostage by it. In The Good Fight, I refer to that as getting into conflict debt. And much like racking up credit card debt, the costs of conflict debt compound the longer you leave it unresolved.

What are the Costs of Conflict Avoidance?

The price you pay for carrying conflict debt is high (think penalties and compounding interest)—and it’s not just you who pays. Leaving issues unresolved is costly to your business, to your colleagues, to you, and often to your family and friends. The next time you tell yourself that the price of avoiding a conflict is a price you’re willing to pay, think about whether everyone else wants to be on the hook for your tab.

Impact of Conflict Avoidance on Your Organization

You might have issues with your team’s plan for a new store format, but isn’t it your decision whether to raise it or not? Well…yes, it’s always your decision whether to open your mouth. You’re going to be the one to bear the brunt of it if your concerns evoke ire or trigger a tirade. While you’re thinking about the risks of saying something, it would be great if you also thought about the downsides of not saying anything. 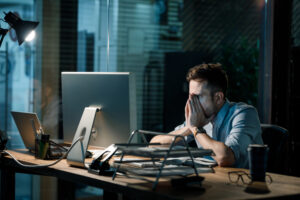 When you back away from forcing trade-offs, you perpetuate the pervasive problem of diluted resources. If your team needs to make a call on one approach versus another, don’t let anyone try to pass off the trite BS about the “power of the and.” If no one has the guts to force a trade-off between two options, you’ll commit to both but decrease the likelihood that either will succeed. (Not to mention that you’ll sign everyone up for an even more overwhelming workload.)

Don’t spread the love if it means you spread it too thin.

Avoiding conflict is also a sure-fire way to stifle innovation. If you aren’t willing to fight for a breakthrough answer, you’ll probably end up with a mediocre, incremental solution. (As they say, a camel is a horse designed by a committee.) If no one cares enough to let the conversation get heated and a little messy, you’ll end up vulnerable to the competitors who have the guts to dream bigger.

Don’t ignore a battle if it will help you win the war.

Choosing to avoid conflict does not mean you’re choosing not to hold a grudge. If you pass on making your concerns known, you set up for stalled and bumpy implementation. If no one is willing to slow things down long enough to resolve the issues, you better be prepared for lengthy delays, people reopening the decision through back channels or active sabotage of the program.

Don’t be a hare at the start when the tortoise crosses the finish line sooner.

Avoiding conflict is also a problem if risks are left unexposed. If the concern you’re choosing not to express affects the success of the plan, then staying silent means leaving the issue buried. If no one is willing to call out faulty assumptions, name the potential pitfalls, or expose the downside risks, you’re setting yourself up for trouble.

Don’t leave land minds buried if you’re the one likely to step on them.

Impact of Conflict Avoidance on Your Team

Conflict avoidance is bad for business. But, unfortunately, it’s also bad for teams. Leaving issues unspoken can allow interpersonal wounds to fester, and resentment is toxic to teams. So before you decide not to rock the boat, consider these implications of conflict avoidance on teams. 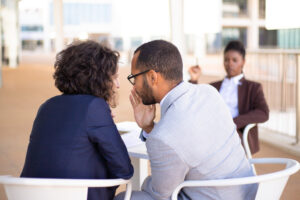 Avoiding conflict with a teammate seems like it should be good for trust, not bad for it, but if your teammates can’t count on you to be candid with them, can they count on you at all? If no one is kind enough to say the uncomfortable things to one another directly, how will anyone have confidence you have their back when it counts?

Don’t be nice if it means being unkind.

Sometimes the conflict you’re avoiding is the one where you say, “Hey, how come I’m getting more work than everyone else?” It’s so common for managers to keep loading work on the people who consistently deliver and slowly let out slack to those who can’t or just don’t. If you aren’t willing to advocate for yourself, don’t be surprised if the workload gets way out of whack.

Don’t let your manager keep adding things to your plate if something’s going to drop.

Don’t suck it up if sucking it up is making it suck.

Impact of Conflict Avoidance on Your and Your Family

Ok, who am I kidding? It’s that third one that matters most. For most businesses, conflict debt is a self-inflicted wound. If you’re not speaking up, it’s probably because of a toxic culture, a crappy boss, or the tolerance of vindictive behavior from colleagues. My sympathy only goes so far.

When you avoid a conflict at work, it’s doesn’t go away. For the most part, you can’t just “move along.” Instead, the issue haunts you: an intrusive thought interrupting you while you’re trying to be productive; a scenario playing out over and over in your head at 3 am, or a general feeling of dread hanging over you even when you’re at home. If you’re not making a dent in the conflicts at work, you’re letting them make a dent in you.

Don’t swallow a toxic issue and think it won’t poison you.

You can’t usually avoid a conflict once and be done with it. Avoiding conflict is a process, one that requires you to invest energy to continually duck, dodge, and defer the issue. (That’s why the debt metaphor makes sense, the interest compounds.) If you aren’t willing to resolve a problem once and for all, worrying about it will drag you down, and the residual effects will make you less productive.

Don’t carry an issue home if you’re going to spread it to the people you love.

When a conflict starts brewing at work, it’s so tempting to bite your tongue, suck it up, pick your battles, and steady the boat. After all, you could make a case that doing so would help you go faster, strengthen your team, and be way less stressful for you. Sadly, it doesn’t usually work that way. Avoiding conflict only allows it to grow. Until you pay off your conflict debt, you pay a heavy price for the privilege of carrying it. 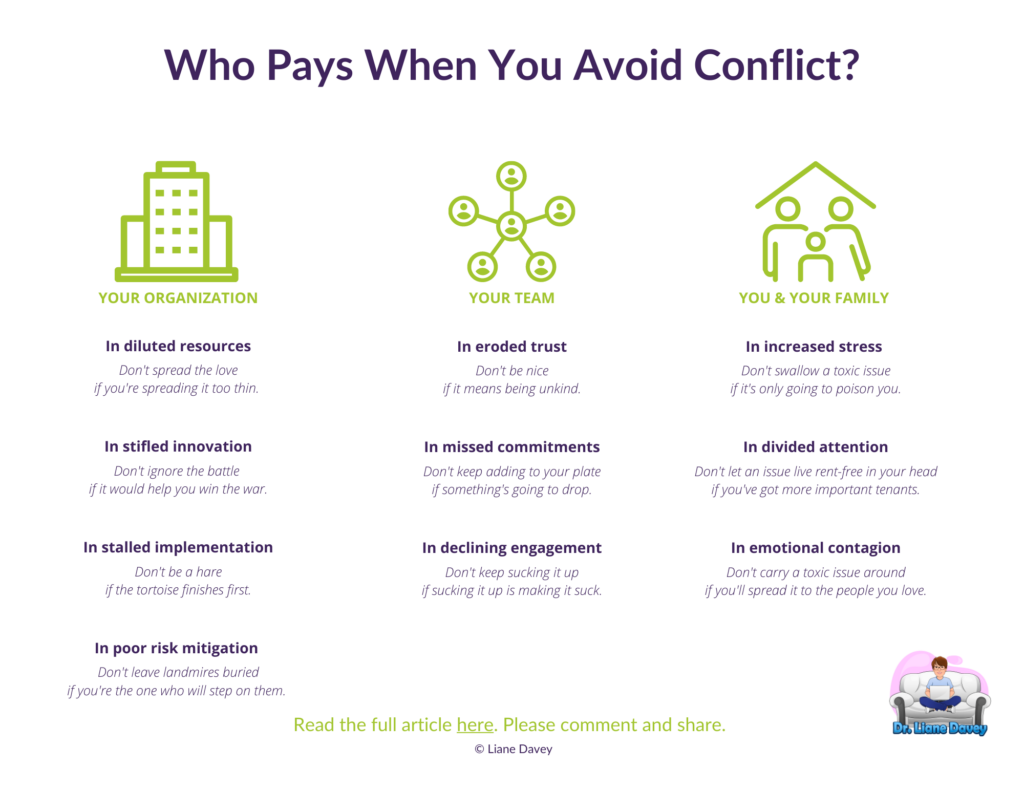 Don’t pass conflict aversion to the next generation