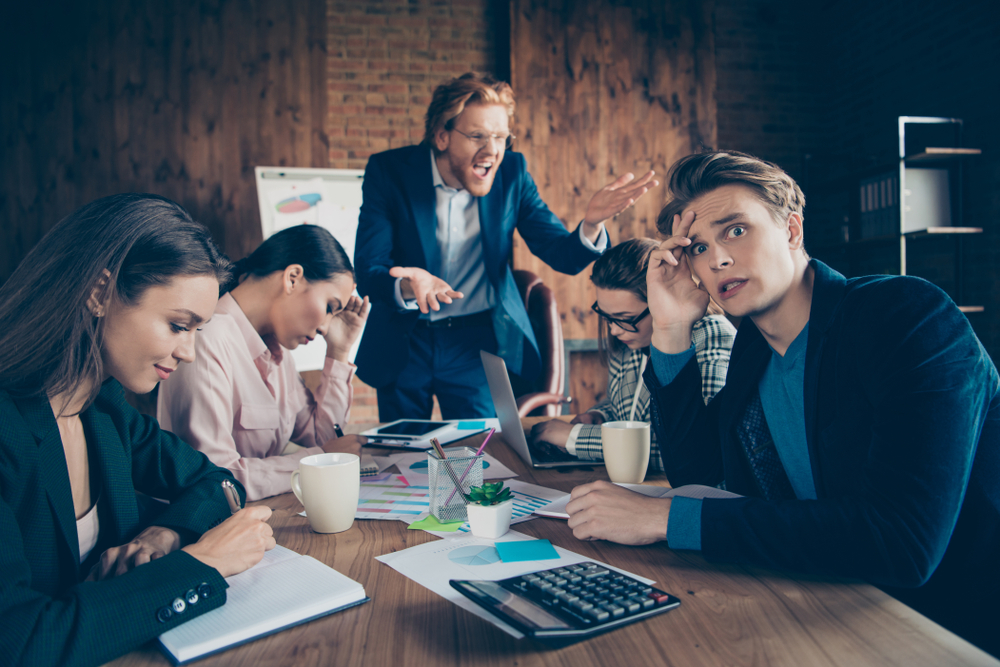 Is your team dynamic toxic? Does it detract from your ability to get the job done? Is it ripping you and your colleagues apart? Or just ripping you apart?

Or maybe you think everything’s fine, but the poison in your team dynamic is like lead in the pipes. You don’t know it’s there but it’s slowly making you ill.

Want to identify what might be going on? Dig in.

What are Some Common Toxic Teams?

There are many ways your team dynamic can become toxic. I wrote about each of them in detail in my book You First: Inspire Your Team to Grow Up, Get Along, and Get Stuff Done. Let me give you the summary. Here’s the list of the toxic teams. Read them all or click on the name to jump right to the one that sounds familiar.

Crisis Junkie teams: lurch from one emergency to the next

Bleeding Back teams: passive-aggressive, stab you in the back vibe

Spectator teams: not really teams at all. Collections of direct reports to the same person

Bobble Head teams: people going along to get along…uh-huh…yeah!

Definition: A team that needs an urgent and immediate threat to come together. 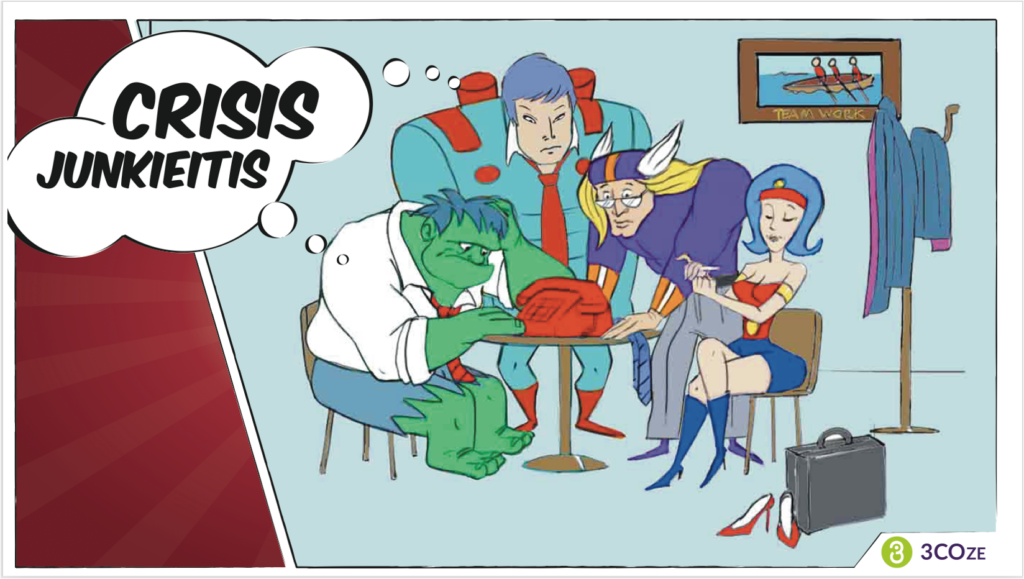 Crisis Junkie Teams struggle to get anything done. At least when things are calm. Only when it turns into a four-alarm fire does a Crisis Junkie team kick into gear.

What Causes a Crisis Junkie Team?

Crisis Junkie teams are usually failings of the leader. Without the courage or the wherewithal to prioritize, make hard trade-offs, or ever ruffle any feathers, the leader leaves the team rudderless. Crisis Junkie Teams have:

What is the Impact of Being a Crisis Junkie Team?

Crisis Junkie teams are costly to members and to the business. Common consequences include:

Definition: A team where passion and enthusiasm are misdirected into personal and unproductive conflict among members. 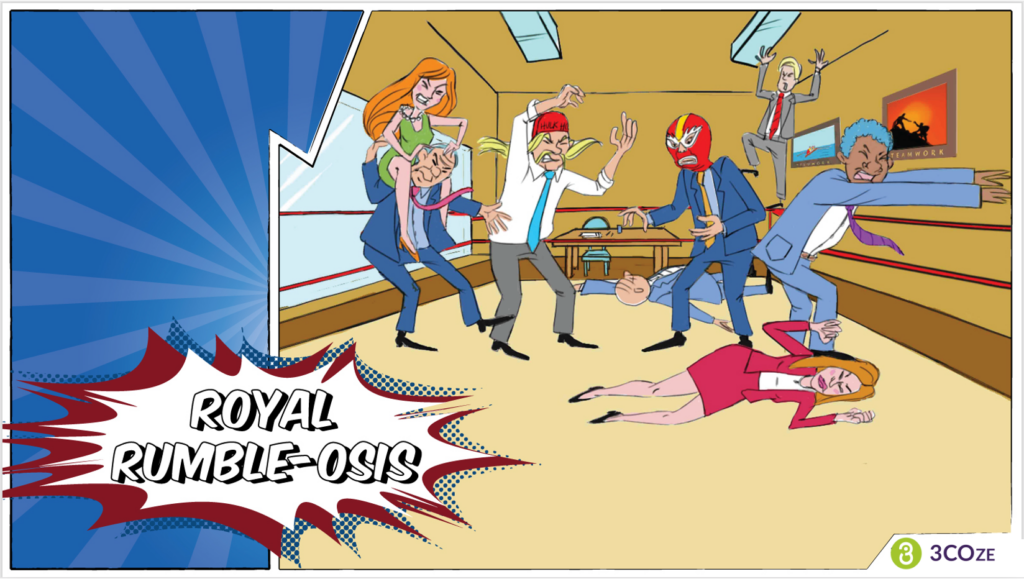 With Royal Rumble Teams, it’s less about what they look like and more about what they sound like. The volume is usually set to 11. There’s lots of yelling, frequent ping-ponging back-and-forth, and very little listening.

What Causes a Royal Rumble Team?

What is the Impact of Being a Royal Rumble Team?

Royal Rumble teams are particularly noxious, particularly for anyone around the table who doesn’t like conflict. Common consequences include:

Definition: A team where conflict and differences of opinions are expressed through passive-aggressive means such as humor, gossip, and back-channel decision-making. 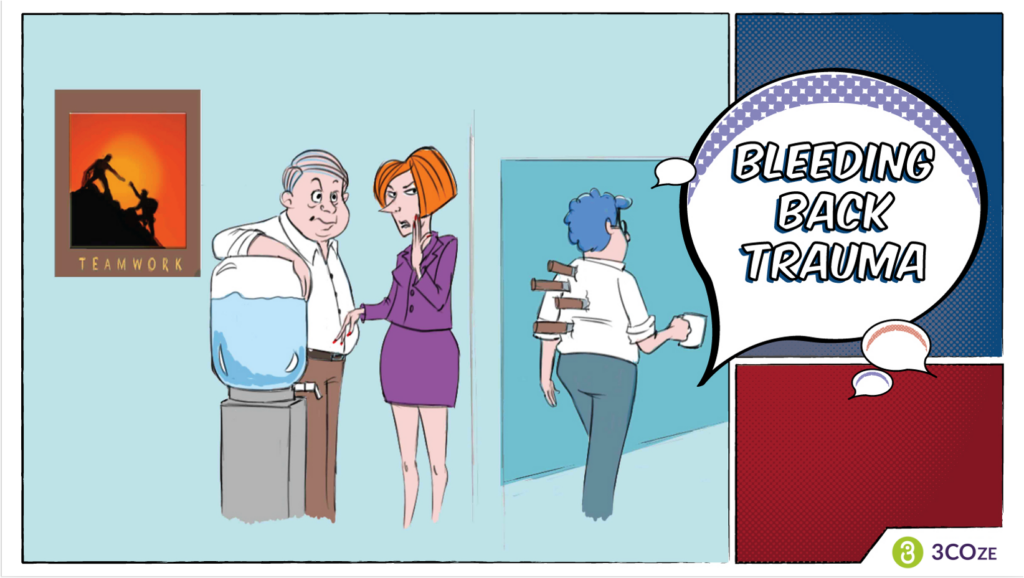 Bleeding Back teams look amicable on the surface but if you listen in to the talk at the water cooler, things aren’t so rosy.  There is little progress on a Bleeding Back team because decisions are either reopened or simply ignored by mutinous members.

What Causes a Bleeding Back Team?

Bleeding Back teams are common in places where no one wants to appear oppositional or where they lack the skills to dissent productively. They’re full of people who think they’re being nice by stabbing you in the back but never in the front. Bleeding Back Teams have:

What is the Impact of Being a Bleeding Back Team?

Bleeding Back teams slowly erode your faith in your team and make you question who you can trust. Common consequences include:

Definition: A team where the whole is equal to the sum of the parts because individual members contribute only in their own areas, with little discussion or debate. 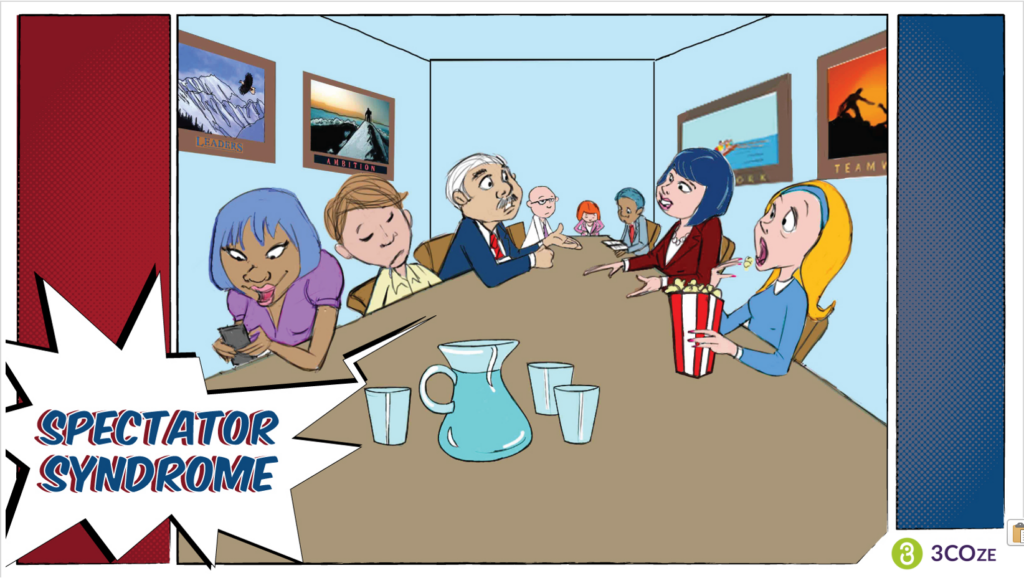 Spectator teams look like the people at a tennis match. Usually, there are only two people talking and everyone else is looking from one to the other. No one interjects. No one opens up the narrow thinking. No one spots risks or challenges assumptions. They just stare blankly.

What Causes a Spectator Team?

Spectator teams are a result of the profound overwhelm people are experiencing. There is too much information, too many priorities for anyone to feel fully confident in their own area, let alone being informed enough to weigh in on someone else’s. Spectator Teams have:

What is the Impact of Being a Spectator Team?

Spectator teams are a giant waste of time. They create a false sense of security while churning out decisions that haven’t had the benefit of diverse thought. Common consequences include:

Definition: A team that is too aligned and doesn’t have enough diversity or dissent to make good decisions. 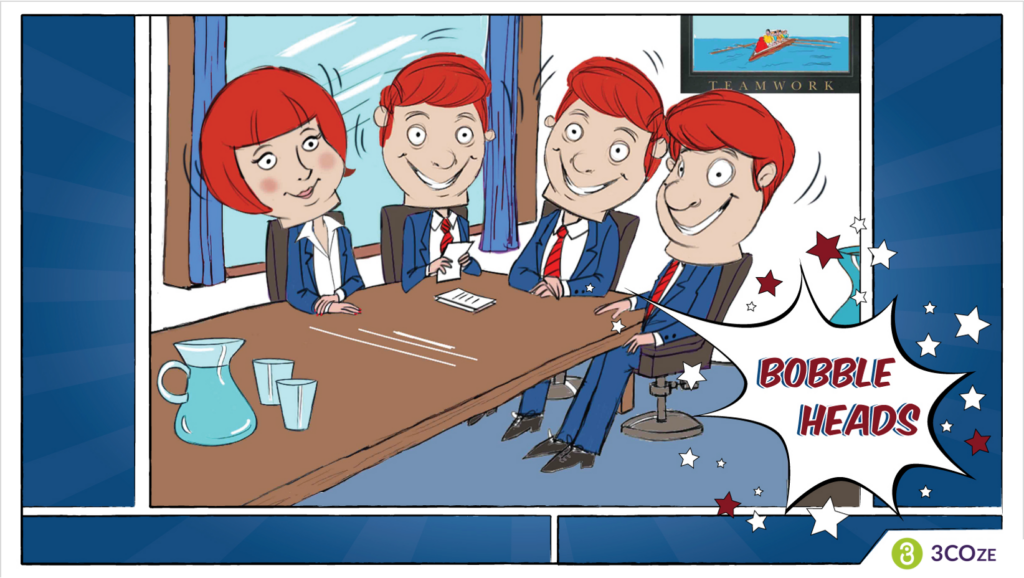 Bobble Head teams look really, really happy. I think of them as the families on the game show Family Feud. Uncle Larry throws out a ridiculous answer and everyone hoots and hollers, “Good answer! Good answer!” There’s lots of nodding and agreeing on a Bobble-Head team. Because of this, they are often not recognized as toxic because toxic positivity is welcomed and even encouraged in some organizations

What Causes a Bobble-Head Team?

Bobble Head teams are a result of placing greater emphasis on a harmonious team dynamic than on the quality of the team’s output. Bobble Head Teams have:

What is the Impact of Being a Bobble-Head Team?

Bobble Head teams are dangerous because their risks are so insidious. Common consequences include:

The Cost of Being on a Toxic Team

Did you recognize your team in one of these descriptions? People often tell me that their team is a melange, a potpourri, of several of these dysfunctions, or that the particular dysfunction depends on the day.

If your team is developing a toxic dynamic, it’s important to recognize it before it starts to impact your customers, your relationships, or your stress levels.

Still worried about your toxic team?

I’ve also got this quick video on the different flavors of toxic team, if that’s more your thing:

An Exercise to Expose Team Dysfunction in One Meeting

Why your volunteer team sucks and how to make it better

Top 10 Signs that Your Dysfunctional Team is Getting Better