An Exercise to Expose Team Dysfunction in One Meeting 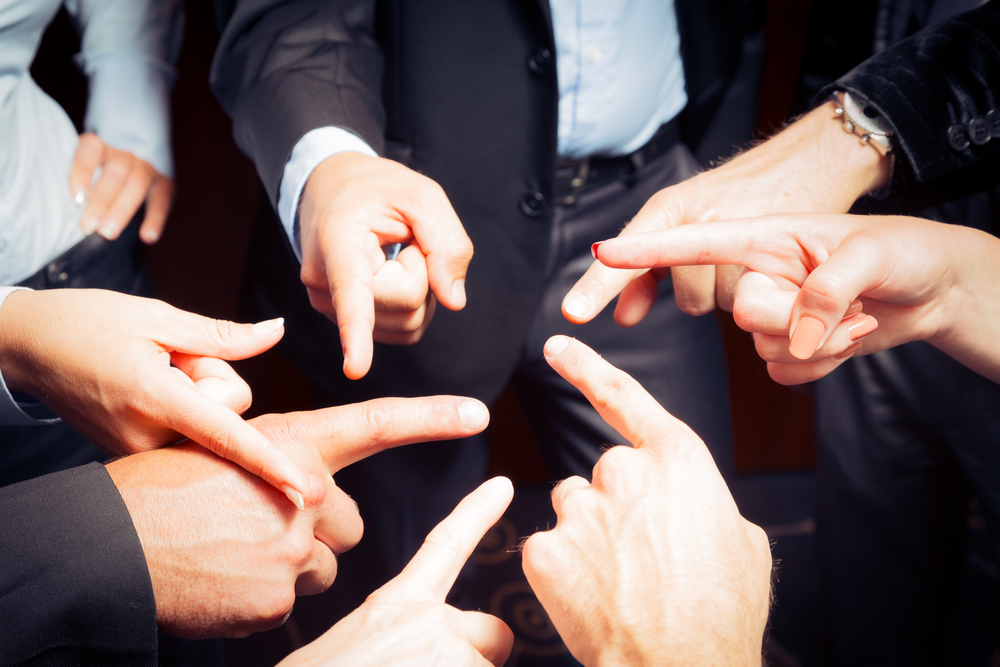 I am working with a team of executives who have gotten themselves into a bad spot. Each has become entrenched in the notion that their teammates aren’t trustworthy. Their feelings about each other have already spread to the layers below and the CEO has now heard multiple examples of uncooperative behavior across teams. I’ve been brought in to help them get to the other side of the conflict before it does any more damage.

My first meeting was only a couple of hours—not much time to get to the heart of dysfunction they said had existed for at least three or four years. But I had to try. I turned to my favorite exercise for exposing dysfunction, which I hadn’t used in a while. I realized I hadn’t shared it with you, so now’s the time.

Here’s how to use this post to maximum effect:

Team Members: If you are a member of a dysfunctional team, read ONLY to the end of step 2 and then complete the exercise to that point before reading any further.

Coaches and OD Consultants: There will be so many opportunities for you to use this exercise with your clients…have at it!

This is a great exercise because it requires no special equipment, just a pen and paper. (Although, as I learned at a session in Silicon Valley recently, that might be special equipment in your organization. If so, bring supplies!). It’s also great because it takes only about ten minutes. Here are the instructions.

Give them five minutes to capture their ideas. Flex on the time if at five minutes, everyone is still feverishly writing.

Again, don’t be too rigid in the timing. If they’re still pouring their hearts out, let them go. When they’re finished writing, you can reveal the next step.

I don’t have people read their statements out loud, mostly because they are so rife with blame that they could send the whole delicate situation off a cliff for good. The message hits home without them having to share.

By this point, folks are usually feeling a little warm under the collar. The majority will have filled both paragraphs with all the things their colleagues did to create the problem and all the ways everyone else needs to change before anything will improve.

From those two pieces of information, you, and more importantly, they, can identify what role they are playing in the story they are telling themselves about the dysfunction. That matters—a lot! Humans are storytellers and if the team members in front of you each have themselves as the victim of the story, the plot line will be a tragedy.

It seems incumbent on me to now cram the complexity of these perspectives into the mandatory 2×2 grid. Oh well, why not!?! 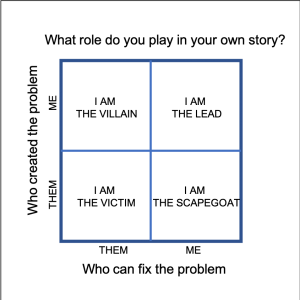 (It’s up to you whether or not you share this assessment with the team. I don’t. I simply use it to describe the different options we have for how we approach team dysfunction.)

By far, the most common result of this exercise will be that you find yourself in front of a room full of people who are the victims in their own stories. I write frequently about victims because I find them the most tragic people on dysfunctional teams. Once someone has convinced themselves that the whole ugly mess is being done to them, rather than by them, it can be incredibly difficult to get them back contributing.  If you stay in a victim role for too long, you become more of a burden to the team than any other character. It is the people who play victim who often need to leave a team to restore it to health.

There’s not much chance that you’re going to find someone who is willing to admit that they created the problem, but that they are helpless to fix it. If you do, they are likely struggling with self-esteem issues and will need you to follow-up on the team session with a one-on-one conversation in a safer, more private space. Don’t worry, in all the times I’ve done this exercise, I’ve never seen anyone willing to admit that they contributed to the problem but have no way of contributing to a solution. (Remember, we’re talking about behavioral issues here. There are plenty of times people really have created technical messes that they can’t solve.)

I hope for you that you find someone in the room that took the leading role in their own story of the dysfunction. These are rare and valuable people who, when prompted, can see and admit that they played a role in getting into the unhealthy situation and that they need to play a role in getting out of it. In my session last week, I had one, and his willingness to start most of his sentences with “I” really changed the tenor of the room for the better.

Ok, so by now you see that we’re trying to get people up to that top right box (aah, the blessed promised land of the top right box). That’s where the exercise goes next.

You have choices here. If you have another 10 minutes, you can have them write their new paragraphs right then and there. If not, you can assign them as homework or convene another meeting where you’ll move to part 2. Here are the instructions for the second section.

Finally, you can move toward action.

To their credit, most people get this one. Many of the actions are related to their mindset, such as, “I can give Lou the benefit of the doubt.” Interestingly, sometimes that’s all it takes. So much of the conflict has been manufactured within people’s heads that simply shifting the narrative ends the conflict. In other cases, you’ll need to prompt them to take action. With the team last week, there were examples of how the animosity among the leaders was affecting how their teams interacted, so they each committed to speaking with their teams to reset on the expectations about collaboration.

Ok, that was a bit of a long one, but this is such as simple exercise with such profound results. I am keen to hear what insights you get from using it. Share your responses in the comments.

Hey, I should thank you for your patience in waiting for a post—I know it’s been a while. I was pre-occupied launching my new book, The Good Fight. If you haven’t seen it yet, I really encourage you to pick it up. It’s full of exercises like this one that will help you get out of the unhealthy conflict cycle and start using productive conflict to make your team better. You can download a couple of sample chapters here. If you have read it, the most helpful thing you can do is to post a review. Would you do a girl a favor and write one? Thanks so much.

See you next week!

How to recover when you feel wronged

From HBR: On a terrible team? Maybe you’re making it worse