What To Do With an Untrustworthy Teammate

I started thinking about this when writing about what to do when you’re dependent on a colleague who isn’t up to the task. When the issue is credibility or dependability, I was comfortable giving you a way to trust the process when you can’t trust the person. (Check it out here.)

But that approach is worth as much as a comb to a bald man if the issue is that the person you’re counting on has no integrity. And while I don’t think it happens all that often (we tend to get overly dramatic and think people have no integrity when they’re just struggling to keep up), when it does happen, you need some approaches to help you cope.

There are infinite ways for a colleague to demonstrate that they’re slimier than a snail, so I’m going to concentrate on the specific (and miserable) situation where you’re working interdependently on a task with someone who’s not trustworthy. Let’s call this colleague Snidely (after Snidely Whiplash, the archrival of Dudley Do-right of Rocky and Bullwinkle fame).

Here are three dastardly tricks that your Snidely might get up to and what you can do about it.

Pretending They Know What They’re Doing

Ugh. This sucks. If only Snidely had the guts (confidence/humility/grace) to let you know that they are out of their depth, you’d be able to help before you both go down with the ship. Alas, no. Snidely’s going with “fake it ‘til you break it.”

Ideally, you want to get out ahead of this scenario by talking about how Snidely will approach the task before you start. For example, use open-ended questions such as, “How will you tackle the competitive review section?” or “What were you thinking for a template for the proposal?” That approach does a few things: 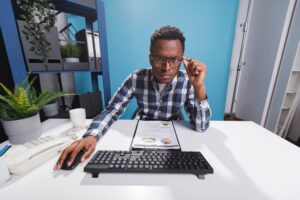 If you get unsatisfactory answers, let your Snidely know that they need to figure it out. “I can’t do my part of the proposal until you develop the framework. I’ll put a time in the calendar for tomorrow to hear what you’ve got.”

If you get something back that isn’t going to cut it, you can ask them to get some help by saying, “This framework doesn’t have anything about our differentiation. Who could you ask to work with you on that section?”

If you have to escalate, ask your manager to help you out. Be sure to frame it as “we need help,” rather than pointing fingers with comments like, “Snidely doesn’t know how to write a differentiators section.” There will be many moments when you would love to push Snidely in front of a train, but doing so will only leave people questioning your integrity instead of the true bad guy’s.

There are many reasons why your Snidely might be hiding their incompetence, and a few of them are even worthy of empathy. But, as much as possible, give them a path to ask for help without explicitly admitting that they need it.

Who doesn’t love being blamed for something that you had zero ability to control?!? Low integrity Snidelys can’t bear to own up to their failings, so if someone has to take the fall, it will be you, not them.

Again, being proactive will put you in a much better position here than trying to justify your actions after the fact. If you’ve been burned by your Snidely before, start on a different foot this time.

One essential part of that is clarifying who is responsible for what in your shared accountabilities. Document everything. Preferably, build the plan together and enumerate each of your responsibilities, any check-in milestones, and the deadline for each item. Do not allow any item to have both of your names beside it. If it’s a shared responsibility, it isn’t specific enough. Split the task apart until you can name who owns what.

Save this document. If any milestones start to slip, return to it with a simple, “You committed to having this in draft form by yesterday. When can I expect it?”

If you need to involve your manager, be extremely careful not to judge or blame your wily teammate. Instead, go asking for help or advice. For example, “Snidely and I agreed to these timelines, and now they have slipped. I have followed up with them and have not received a response. How should I handle it?”

Those techniques are only available if you are onto your blame-bombing co-worker from the start. If their finger-pointing comes out of leftfield, it’s harder to cope.

Finding yourself center court in a blame game is unpleasant but resist the urge to return Snidely’s serve. Sure, it shows low integrity for them to start accusing you of transgressions when they were the issue, but some people are incapable of taking ownership of their mistakes because it would shatter their fragile self-esteem. So don’t stoop to their level. Instead, own what’s yours, expose the facts, and set yourself up better next time.

Sometimes you start to get wind of a smear campaign being waged by Snidely. If you’ve earned a good reputation and strong relationships, you might hear it directly from someone who wants you to know what’s being said about you. In other situations, you might notice that people are looking at you differently. Either way, it’s not good news. 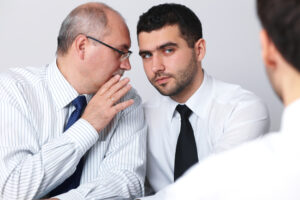 If you’ve seen this plotline before and know that Snidely will try to turn people against you, you can get out ahead of it by asking for your teammate’s tips and advice for working with them. This will demonstrate that you’re being proactive and open to making the relationship work. That will make them less susceptible to the slander about you if it comes.

The fear of being maligned by your Snidely should also encourage you to invest in the alignment and documentation strategies I mentioned earlier. You want clear evidence that you knew your responsibilities and delivered on them in every case. If you’ve got the record of what you agreed and what you did, you’ll be able to avoid name-calling and baseless accusations that might leave your colleagues feeling just as dubious about you as Snidely.

Again (harping, sorry), you mustn’t resort to bad-mouthing Snidely in return. You’ll destroy any hope of gaining valuable allies and ultimately leave your teammates with the conclusion that you and Snidely deserve each other.

In each of these scenarios, I’m advocating that you make it harder, more uncomfortable, and more obvious when your Snidely is behaving with low integrity and make it easier, more rewarding, and more visible when they take the high road. Of course, it’s not a guarantee that an evil villain will suddenly start acting like an Eagle Scout, but it’s a heck of a lot better than just hoping for the best.

How to Get People To Live Up to Your Expectations

Dealing with trust issues on your team

How quickly do you trust?

Video: Did You Hear About…?