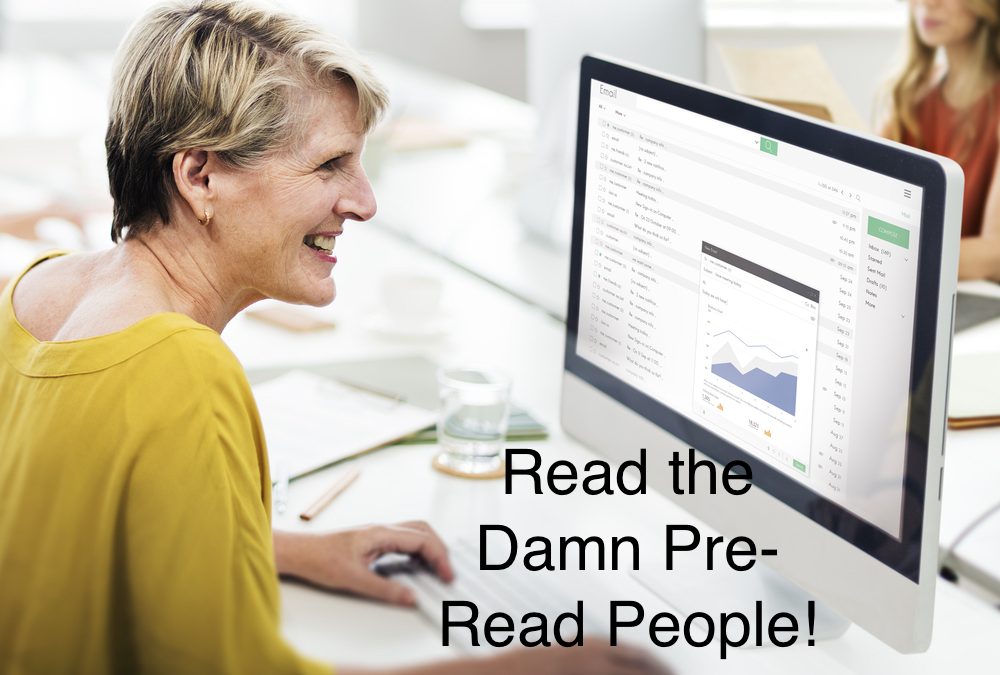 I was talking with someone this morning about the sorry state of meetings. We spend so much time in the weeds and waste a precious opportunity to have valuable conversations about stuff that really matters. We talked about a few things, but the one that left me fired up was the amount of time we waste going through information that has been sent out in advance.

Here’s how it usually goes. You receive an email with the subject line “pre-read for tomorrow’s meeting.” Attached is a bulky PowerPoint presentation with no explanation or specific request. When you get to the meeting, you realize only you and one other person read it. The presenter gauges the lack of preparedness and proceeds to walk through the entire presentation. This is incredibly annoying (almost punitive) for you. Worse, it’s a complete failure of accountability for the lazy people who didn’t.

Sound familiar? (You know I was just sucking up by making you the person who does the pre-reads, right? Are you feeling a little guilty because you’re actually the one who doesn’t? Read on.)

Your meetings would be much more effective if you actually read the pre-read. But I get it, I know your life is zany and one more pre-read might just put you over the top. To make that more manageable, here are my rules for meetings and pre-reads.

If you’ve prepared a 72-page presentation about your project with every detail of how you arrived at your recommendations and how you’ll roll out the project do not consider that your pre-read. It’s your responsibility to winnow the material down so only the important and relevant information is included.

This heading doesn’t even need text. Provide enough time for people to read the pre-read. Don’t send it out the night before and expect your teammates to choose between pre-read or 7 hours sleep. Duh.

Ask for what you want

In the covering email, give your colleagues specific information about what you want them to do with the pre-read. Tell them if it’s for information, whether you’re looking for a recommendation, asking them to choose between different options, or simply asking for their help to identify implementation issues. Ideally, include call-out boxes within the document that draw attention to particular points and ask specific questions.

Wait! Does it need a meeting?

If, as you were figuring out what you want from your colleagues in the previous step, your answer was “I just want you to know this is coming,” then it does not need a spot on the agenda. If the team isn’t going to change the trajectory of the issue, it doesn’t deserve precious meeting time. In your pre-read, be clear that the default is to move forward and ask anyone with concerns or questions to raise them during the “other business” section of the meeting.

If you do want the team to add value, you’ll need some form of presentation in the meeting. When you get up to present your information, don’t just go over the material slide by slide. (And please don’t say “I’m not going to go through this in detail” and then go through it in detail!) The valuable stuff to include in your discussion is:

Spend no more than half of your allotted time getting through this information.

Turn up the heat

The reason so few people read the pre-reads these days is that they don’t have to. No one flinches when they ask a question that was clearly covered. So if you’re going to change your team’s culture, you’re going to have to turn up the heat on the slackers. If someone asks about something that was clearly covered in the pre-read, just politely say “you’ll find that on page 3 of the pre-read, where it says…” If the problem persists, the team leader might need to make a friendly reminder that the team can only work efficiently if people do their homework.

Sometimes, the discomfort of asking a question that might have been covered in the pre-read leads the slacker to stay silent. Inevitably, that will be the person who will, two weeks later, raise a concern about the issue. You can’t just let that go. Stay calm, but get your point across, “Don, we spent 30 minutes in last month’s team meeting on this issue. It’s not an appropriate time to raise this now.” If it’s an earth shattering concern, you’ll need to put it back on the team agenda but not without making it clear that it slowed the whole process down.

You’re busy, I know. You’re tired, you want to go to bed and the last thing you want to do is read a pre-read for tomorrow’s meeting. But short-term pain will mean long-term gain in the efficiency and effectiveness of your team’s decision making. Read the damn pre-read.

How to make a meeting more useful