by Liane Davey | May 20, 2018 | About teams, Be a better team member, Communicate, conflict, How to fix teams, Personal Development, Right Words to Say 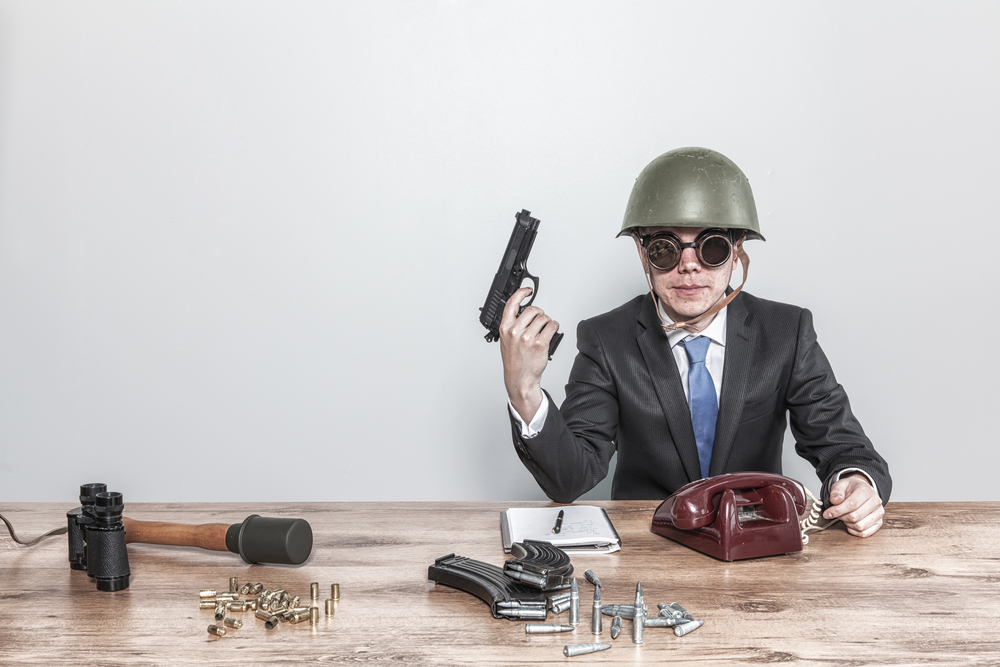 “Do you agree that we should pick our battles?” This was a question I got during the Q&A session of a keynote speech I gave last week. I think I surprised the questioner with my response, which means I might surprise you too, so here goes. If you are “picking battles,” you’re getting conflict all wrong.

Before I give you a practical alternative to fighting battles, I first, feel compelled to comment on the use of war metaphors to describe conflict. No wonder we find workplace issues aversive, we think it’s warfare! You’re not at war. You are especially not supposed to be at war with people inside your own organization. That would count as friendly fire and there’s no more tragic way to be wounded than by your own side. Yet, war language is pervasive in teams. In addition to “pick your battles,” I’ve heard “I need more ammunition,” there will be, “collateral damage,” and even one person who wanted to defend his plan with, “guerilla tactics.” That alone is enough reason for not “picking your battles” with colleagues.

If we put the fact that it’s a misplaced war analogy to the side, I still worry about the idea behind picking battles. Once a conflict has reached battle proportions, it’s going to be costly to work through it. It’s probably already cost your business in lost productivity or delayed action. It’s almost certainly cost your team a few trust and engagement points and cost you at least some indigestion, if not worse. The secret to neutralizing the harmful effects of conflict is to break it up into much smaller bits. Healthy conflict becomes a habit—frequent, casual conversations to surface and resolve issues before they ever become arguments, let alone battles.

Next time you hear something that doesn’t sit well with you, send signals that something’s not right, “I’m not even sure what isn’t sitting well with me, but something in the plan doesn’t feel right.”That way, you’re slowing things down enough to indicate that something’s wrong. You won’t ambush(dang, these war metaphors are everywhere)people with your opposition later.

Ask questions to help you pinpoint what is bothering you, “What do you mean when you say, ‘cost-effective?’ We might have different ideas of what cost-effective looks like.”Open-ended questions convey that you’re staying curious and open to what the person is saying.

Give feedback to help your colleagues understand how their comments are landing with you, “When you talk about return on investment when it comes to brand awareness, I worry that you’re looking for quick results from a process that takes years. I don’t feel like we’re set up to succeed.”

Provide validation of what you’re hearing from your colleague to demonstrate that you’re willing to accept multiple perspectives, “You need to know that the marketing dollars are well spent, particularly because we’re giving up some sales investments that would pay off in the short term.” You don’t have to agree with the person, you just have to show that you’re listening to them.

Test out possible solutions by floating trial balloons such as, “What if we only committed to the first 3 months of spending on the brand campaign and then measured a few things that might give us an early indication that it’s working?” By posing this as a question, you leave room for the person to disagree without getting yourself dug in (whoops…there’s another one!).

I could go on and on with other tactics for building a healthy conflict habit. The point of each of them is to disagree casually, without making the issue into a big deal. It’s also to show that you can disagree with each other and still work as allies toward a solution that makes the most sense for the business. If you do this each time, you won’t have many battles to fight.

So, you’ve replaced your battles with high frequency, low impact discussions, should you be selective about which ones to engage in and which ones to let slide. Yup. Of course. There’s only so much time in the day. Here are a few spots where you might want to let it go.

No wonder so many of us are weary, we’re going to work fighting battles. Unfortunately, many our injuries are self-inflicted because we let conflicts build until they turn into a full-on war. Do yourself a favor and start using a little diplomacy instead.

I’d love to hear your stories of battles, and war metaphors, and all else about the perils of conflict. Share them in the comments.

4 Simple Steps for Those Who Despise Conflict