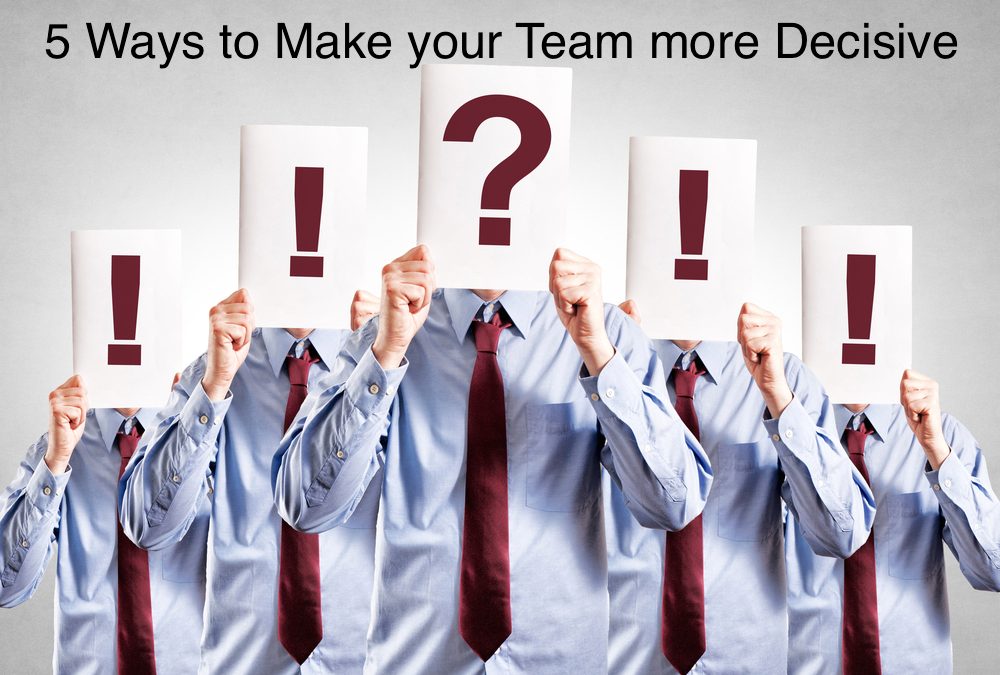 “When we tried to shift from siloed decision making to collaborative decision making, we went straight to no decision making at all! We’ve solved for inclusiveness but created indecisiveness.”  That’s a paraphrase from a conversation I had with a senior leader last week.  Can you relate?

Many obituaries have been written for the old command and control era, most with a celebratory tone that the old hierarchical approach has yielded to a new, more inclusive form of management.  Unfortunately, many of us were raised with that top-down style and have never learned how to make decisions when it’s a group of equals sitting around the table.

The most common reason I see for the failure of collaborative decision making is that the decision itself shouldn’t be collaborative.  Shy of taking a vote, groups don’t make decisions.

So, your first step is to determine who the decision maker will be.  If your boss assigns you to a cross-functional team, ask who among you is in the lead and can ultimately make the decision. Wait for an answer before investing your time.

Unclear roles in the decision making process lead to people over- or under-contributing.

Start the first meeting with role clarity.  Ideally, get this role clarity before the first meeting.  Specify the role of each person involved in the decision.  In addition to introducing yourself, explaining where you come from and why you were invited, classify your involvement into one of these categories:

Each member of a cross-functional team has a very different perspective on the problem (or opportunity).  That’s a good thing—and the reason why you need all the different people around the room.  The downside is that each person probably has a different view on what a good outcome looks like.

As the decision making process starts, discuss the criteria you will use to make the decision.  What is the most important factor and then how do the additional considerations fall in order of priority.  Are there any absolutes or non-starters that should be known before beginning?  Document these criteria as a way of focusing the conversations on the pertinent issues and as a way of making the decision as objective as possible.

Sometimes, the proposed solutions are so unpalatable to one or members of the team that they threaten to lie down in front of the steamroller.  If you have taken step 1 seriously, then the decision might still be able to proceed. But if the decision maker’s power is tenuous or if the decision maker is reticent to make a decision that will be scuttled in implementation, then you need an escalation process.

Before you start collecting data and weighing options, take the time to set an escalation process.  Particularly if you already have the sense that the decision is going to be gnarly.  Come up with a recommended escalation process and then validate it with the project sponsors.  Get their agreement on who will make the ultimate decision if there is a stalemate within the team.

When the point of decision is getting near, it’s relatively common for one or more people on the team to get cold feet about moving forward.  That can trigger an impressive display of resistance and stall tactics.

To reduce the likelihood or severity of moments of doubt, discuss the risks associated with the decision up front.  Talk about the importance and impact of the decision, the timelines that you need to stick to, and the confidence level you will want to move forward with a decision.  If you determine up front that the decision only requires 80% confidence and must be made by February 1st, then you have a box in which to contain the lingering doubts.

By now you’ve probably realized that the smallest part of the decision making process is making the decision.  Time invested up front can greatly reduce the time to get to a decision and can counteract the indecisive culture that is spreading in your organization.

What else contributes to indecisiveness in your team? I’d love to hear you stories.

Why Decision Making is not so Simple

Can your Team Make Decisions?