Infographic-How to say no to a good idea 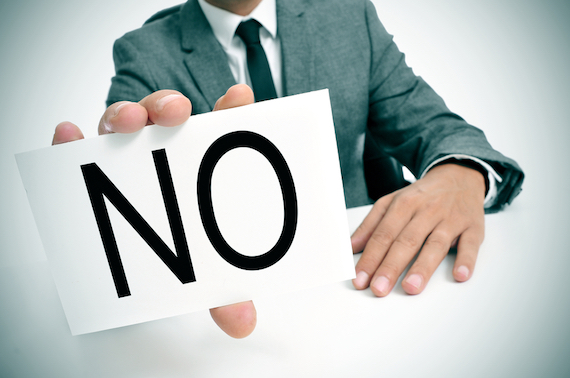 I was giving a speech to the top 400 leaders at a hospital last week. In the Q&A period, I received many great questions, including: “how do I say no to a good idea brought to me by a team member?” You can skip right to the infographic at the bottom or read the full post for more detailed instructions.

As the leader asked the question, he added an example that made it clear how uncomfortable he was with the need to reject good ideas: “Fred, that’s a great idea, but we can’t do it.”

I agree with him that’s it’s a difficult situation and you have to be very deliberate to answer optimally. Here’s the thought process you can use.

Let’s start with the elephant in his sentence: “Fred, that’s a great idea but we can’t do it.” The word “but” causes all sorts of troubles and is almost always a poor choice. This sentence starts with “great idea” and then “but” says “actually, it’s not a great idea, I just didn’t want to hurt your feelings.”

“But” is not an option. You have two other options. First, if the idea really was a good idea, you say “Fred, that’s a great idea.” Period. Then you can go on to share the mitigating factors that might mean you can’t implement it (see below).

Alternatively, if it’s not a good idea, you need to say so. “Fred, I agree that our meal options in the paediatrics ward aren’t great. Unfortunately, your idea of buying Happy Meals for all the patients doesn’t meet our nutrition guidelines.”

Was the bad idea in service of a noble cause?

This post is supposed to be about good ideas, but I can’t help giving you a little more direction on the bad idea side of the equation. If you hear a bad idea with a good heart, there’s an opportunity to reinforce the person’s goal without endorsing their idea.

In this example, try “While Happy Meals aren’t going to work, where were you coming from? What were you trying to accomplish?” You might hear “Our patients aren’t getting sufficient nutrition because the food looks so unappetizing that they won’t try it. I just want to make it more fun to eat!” Then you can explore other, more practical ways of making the meals more fun.

Ok, back to the good idea scenario. Once you have decided that it’s a good idea, you need to determine whether it can be implemented. Some great ideas just won’t work. If the idea is great in theory but not practical, say so: “I would really love to have individualized meal plans for every patient on the ward, unfortunately, we don’t have sufficient food service employees to do that.”

If, on the other hand, the idea is workable, be concrete about what you like. “I love the idea of planning the menu around the rainbow. A variety of colors would make the food more appealing and also more nutritious.”

Is now the right time?

Even the best ideas can come at the wrong time. If the idea is good but the timing is bad, share the competing priorities and talk about when the idea might have a better chance of being implemented. “Fred, I love your ‘eat the rainbow’ idea. At the moment, we’re in the midst of changing suppliers for our fresh produce. As soon as we have a new supplier in place, let’s meet with the dietician and the food service director and build the plan.”

Saying “no” to a good idea isn’t fun. It is, unfortunately, a common requirement of a team leader. Be authentic and concrete in your response and tailor it depending on the value of the objective; the effectiveness of the idea; and the timing relative to other priorities.

You can use this handy dandy infographic to help you respond to ideas recommended by your team members.