Disagree with your boss without getting fired 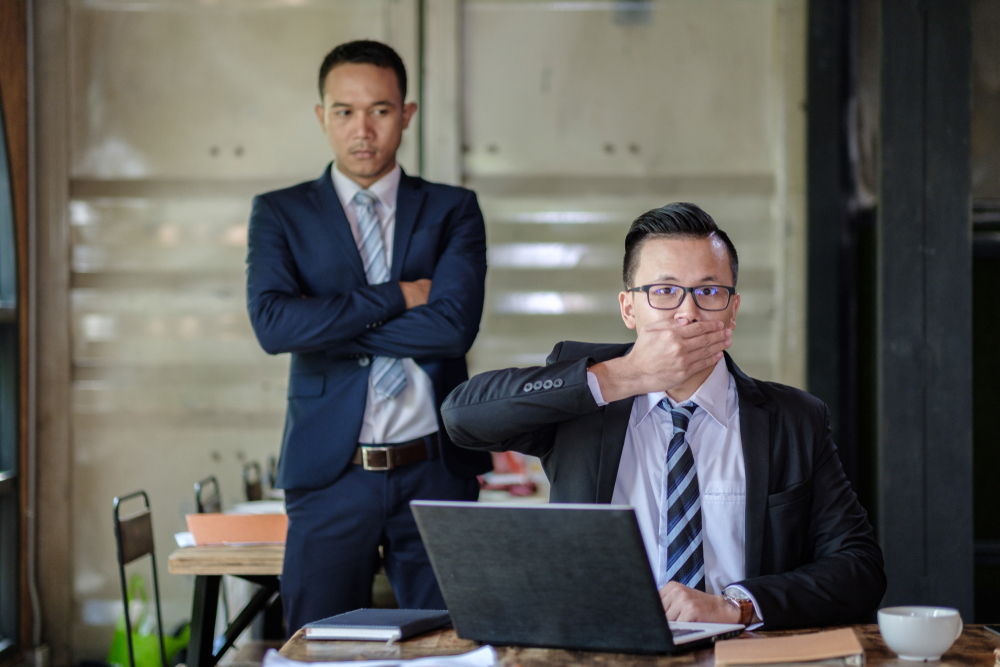 This is the last of a series of posts exploring the causes and impact of our profound conflict aversion. I’m exploring how the things we were told as children, taught us that conflict was bad.  “If you can’t say anything nice, don’t say anything at all,” or “Mind your own business!” or “You made him cry,” programmed us not to rock the boat.  Today, I’m taking aim at a fourth source of our conflict avoidance, our unwillingness to question people in power.

Like most of our conflict aversion, our unhealthy relationship with power starts early. Teachers or coaches behaved badly and we were told to, “Try harder and stay out of trouble.” When we complained that the soccer coach was being mean, we got a pat on the head, “Be a good boy.” And so, we learned not to question people in positions of power. We learned that might is right. Worse, we learned that when someone in power does something ineffective, insensitive and even immoral, it’s us who should change, not them.

It’s no surprise that as adults, we let destructive, disorganized, or dishonest bosses go on doing their damage because we fear getting fired. We’ve learned to tough it out instead of making it better. Now, even hinting that you don’t agree with what your boss is saying feels impossible, let alone initiating an actual conflict.

I really got a sense of how strong this aversion is when I was working with the top three layers of leaders at a retail chain.

I was helping the CEO get the other leaders to step up so he could get out of the weeds and pay more attention to the big challenges facing his business. It was easier said than done.  Most great retailers will tell you, “retail is detail.” After a lifetime of fine tuning prices and rearranging displays, sometimes the CEO couldn’t help but meddle.

The problem was that every time he changed the price of push pins, he overrode the person whose job it was to set the price. And worse, because the pricing is supposed to be done by the category managers two layers below the CEO, it meant that the VP in the middle was disempowered in front of his direct report.

I was talking about what the VP could do in this situation. The CEO had made a commitment to stay out of the weeds, so he was the one who was out of line. I suggested that the VP simply say, “We made a call that pricing would sit with the category managers. Overriding that decision would send the wrong message.”

The VP scrunched up his face and said something I’ve heard hundreds of times before, “Oh sure, you think I’m going to say that to the CEO? I might as well start dusting off my resume.”

“Really?” You really think that if you politely remind the CEO of a commitment he made…that if you protect your category manager from the inappropriate overturning of her decision…that you’ll get FIRED?”

I don’t think he really believed that. He was just frustrated. And my guess is that he was feeling crappy about not standing up to the CEO, not backing up his employee, and it was a lot easier to say he was protecting himself from being fired than to admit he just chose not to do the uncomfortable thing. This had become a costly conflict debt.

This scenario is a good one to work through. How could this leader have the difficult conversation with his boss?

First, when you disagree with your boss, anchor your comments to something that matters to the business. In this case, the CEO is on record saying that they need leaders at every level to step up so he can spend less time on the day-to-day and more time figuring out how they’re going to survive Amazon. That way, you’re signalling that this is an issue important enough to justify a little discomfort.

Second, don’t be sloppy with judgment or drama. Be really precise with your language. Describe what you see. It feels like the boss has just humiliated you in front of one of your direct reports, but that’s not how you want to broach the topic. Stick to the facts.

Third, use the company language of values or principles to couch your comments. That way you’re putting the discussion in the context of rules that everyone has agreed to.

Fourth, disagreeing with the boss is NOT the moment to use your power poses. Nor is it the time for assertions or red lines. Evoke curiosity rather than being assertive. Use more questions than statements. That way, if your boss really doesn’t like what you’re saying, you leave yourself room to change your tack.

The four rules of speaking truth to power.

“I hear you that you think we got the price of push pins wrong and that you want Penny to change it. I’m worried about overriding Penny’s push pin price at this point. I know you’re trying to get everyone to step up. Would you be willing to let this one ride? Then we’ll see how the price affects our results and we can talk to Penny about it next week.”

Best case scenario, your boss says, “You’re right. I got carried away. We’re not going to lose our shirts on one week’s push pin sales. Thanks for reminding me.”

That would be awesome!

But if you think that’s a little Pollyanna and you’re not buying it, what’s the realistic worst case scenario if that’s what you said?

Maybe, “This isn’t about push pins Peter! It’s about our brand and our margins, and whether we have any hope at all of this company existing in 2 years!!!! Don’t you get that!”

“I’m sorry. I was so focused on the development opportunity for Penny that I didn’t think enough about the brand and the margin implications. I got it. I’ll explain to Penny why it’s the right thing to change the price.”

It is highly unlikely that you would end up fired. And maybe your boss would even see your perspective after he slept on it for a while. Conflict aversion is harmful in so many forms, but its impact on the quality of leadership we’re willing to tolerate is one of the worst. It’s time to start disagreeing with your boss sometimes.

How to Work for a Leader Who Needs to be Liked

How to Disagree with Your Boss