4 secrets of avoiding the conflict spiral 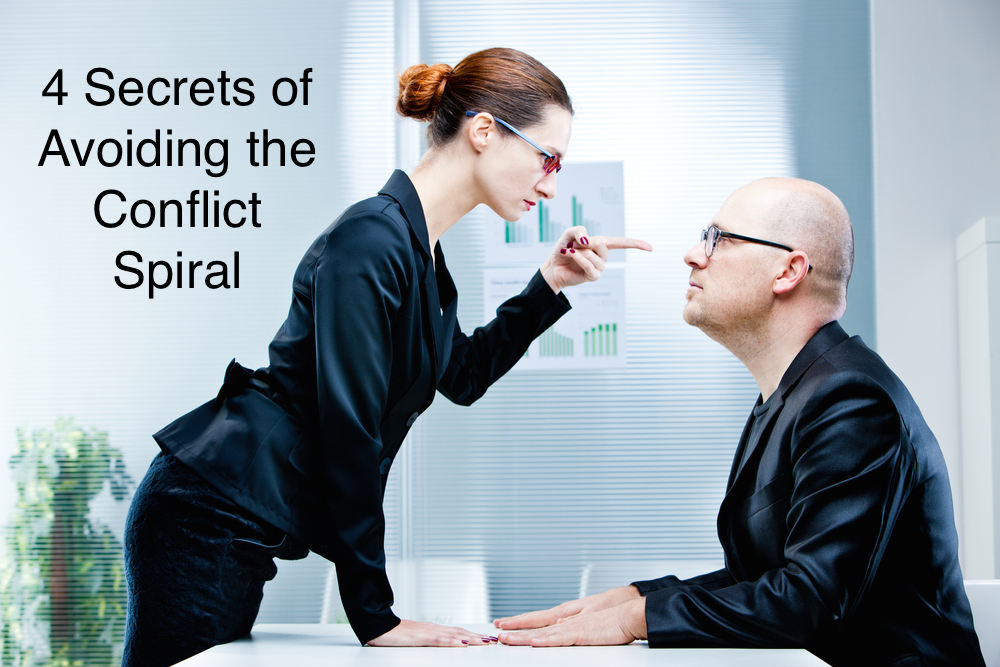 You’ve heard me say it before and I’ll say it again: conflict is a natural, inevitable part of relationships and a healthy, constructive practice for teams

What can you do?

I was reading a theory paper about conflict that suggested two important dimensions in how conflict is expressed: directness and intensity. I thought I would add to those to give you a starter list on how to initiate a positive conflict spiral.

As you read these, imagine that a project your team is working on is not going well. You’re in a meeting discussing what to do.

Direct versus indirect communication of displeasure

The first characteristic of positive conflict is that it’s expressed directly. If you disagree with someone, the best possible thing you can do is to be clear and candid about your position. The alternative is to leave people guessing about what you believe, which is a pretty bad tactic if you want to come to a mutually agreeable outcome.

Of course there are worse things you can do than bite your tongue. You can complain to third parties and widen the spiral of misery.

If a project is off track and you need it to get back on track, move along the indirect-to-direct continuum.  First, stop the whining and complaining. Then, move past suffering in silence, but don’t stop at expressing your concerns indirectly or with sugar coating. Go all the way to a clear, candid, direct discussion of the issues.

If the notion of directly opposing an issue makes you uncomfortable, you’ll be glad to know that the best direct messages are those with low intensity. Low intensity means that your tone and body language are casual and demonstrate your openness to other points of view. Your lack of intensity signals that you’re comfortable with a difference of opinion and that you’re willing to discuss the merits of the different perspectives.

When you’re invested, low intensity isn’t very common.  What’s more likely is that you retrench in response to a difference of opinion, searching for ammunition to use to win the battle. If that sentence resonates with you, then you are probably engaging in high intensity, win/lose conflict. I intentionally used three war metaphors (retrench, ammunition, battle) to highlight how it feels to be in this high intensity mindset.

Instead, try altering the sentence (and therefore your mindset) as follows. I want to really connect when there’s a difference of opinion, listening for insights about how to come up with the best solution. (Connecting is better than retrenching; insights are better than ammunition, and solutions are better than battles.)

Once you’re being more deliberate about how you express conflicting views, it’s time to turn your attention to the assumptions and inferences you’re making about yourself and others. A positive conflict spiral depends on you taking personal accountability for your part in the problem.

Watch what happens if you start your meeting about a derailing project by saying: “I have not been managing this project appropriately. I need to have more frequent touch points.” First, people will look shocked, and then they’ll immediately change their posture (and posturing).

By stating your ownership of the issue and your role in the solution, you will set the tone for others to do the same. That will start a virtuous conflict cycle.

The reason you are able to take accountability for your part of the issue is that you probably attribute the problems to situational decisions or actions. That is, you didn’t decide you’re a bad manager and resign, you just realized you hadn’t been having enough touch points.

Unfortunately, as a human, you’re not wired to be so generous when judging others. Because you make a common error called the Fundamental Attribution Error, you attribute problems or mistakes others make to their capability or character, rather than to the situation.

If you assume that the issue with the failing project rests on your teammate’s poor management skills, you are much less likely to be constructive about how to make things better. Rather than giving up on your teammate as a lost cause, try looking at the context and helping them make different choices to be more successful.

Turning any single episode of conflict into a constructive dialogue is possible if you do those four things: be direct, communicate with low intensity, take ownership, and see other’s behavior as situational. That will feel good in the moment but the huge payoff comes when it’s time for the next conflict. Consider the alternative:

If you’ve had a negative conflict episode, the next episode will probably also sour because each team member now has a legitimate expectation based on bad past experience. So the downward spiral continues and probably accelerates.

In stark contrast, if you have a positive experience of conflict and gain confidence that conflict gets your team to a better place, your next conflict is much more likely to have a positive bias. You’ll be in and out of the uncomfortable spots much faster and with much better outcomes for the business and the humans. That’s a cycle worth continuing.

The Case for More Conflict

When Conflict Gets Emotional