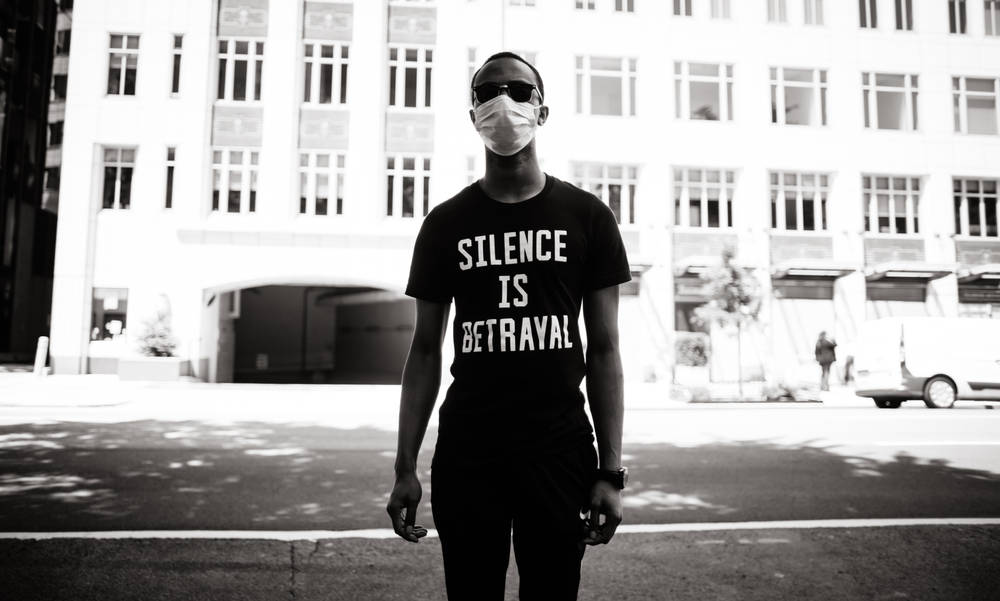 I have spent the past two weeks watching, listening, thinking, and learning about the death of George Floyd and the systemic racism and brutality that led to it. I was comfortable believing that I had everything to learn and nothing to teach. I would use my platform to share the stories of black people because I had nothing credible of my own to offer.

It’s still true that I have no experience, perspective, or expertise that can contribute constructively to the conversation about systemic racism. Well, except the experience of marinating in it, benefiting from it, and allowing it to perpetuate. (I’m doing the work on that privately.)

Then, on Thursday, a friend shared an article published in SmartBrief entitled, “Why are Leadership Thinkers Silent About Floyd and the Protests?” In the article, author James DaSilva argues that our leadership writers do have something to say, pointing out that: 1) they are experts in handling difficulty; 2) they are smart and they care about helping people; 3) they rarely shy away from other hot topics; and, 4) that their silence is a message in itself. He challenged leadership thinkers to “give these difficult topics a chance before you move on with part six of your series on time management.”

It struck a chord with me.

I write about productive conflict. Seems pretty relevant. So, what was stopping me from writing about this issue? On March 22nd, I published my first piece on the impact of the global pandemic—I’m not an epidemiologist, but I felt I had something worth saying. On October 11th, 2017, I weighed in on the Harvey Weinstein story, even saying, “it’s become increasingly clear that staying passive only perpetuates the cycle of abuse.” Why was I hesitating now?

Because I’m a coward. Because race is a powder keg. Because the likelihood that I will get it wrong is so high. Because getting it wrong will open me up to having my privilege, my naivety, and my ignorance exposed. Worse, if I get it wrong (when  I get it wrong), I will have to confront the idea that I’m part of the problem, not part of the solution. I am very wedded to the idea that I’m a good person. What the hell do I do if that self-concept gets holes blown through it?

All of those things are still true as I write this. I’ve just decided that I’d rather confront every one of those accusations than to have to live with myself being too fearful to try.

I will keep it simple. I will not offer anything as truth, only as options for you to consider. In fact, I’m going to write this as a letter to myself, because that’s about as far as I have the right to go.

In your books, speeches, and in random lectures to the kids, you declare that the secret to having difficult conversations productively is to speak the other person’s truth before speaking your own.  You need to do this even more right now. You’ve seen what happens when your friends respond to accusations of racism, exclusion, and othering with quick defenses such as, “I’ve done so much for people of color,” or “That’s not what I meant, at all!” That’s starting with their own truth, and it’s profoundly invalidating.

Remember to validate the person who is making you uncomfortable. Make them feel heard. It’s time that black people feel heard. The very first thing you say must be the other person’s truth. Until you’re ready to speak their truth, say nothing.

You know this one too. Validating someone isn’t enough, especially not now. People are in a big hurry to plaster #blacklivesmatter on their social feeds without taking the time to be curious or to plunge into the depths of black experience. Don’t just say something reassuring, it will come off as trite. Ask a question. And maybe before you ask that question of a black friend who’s spent the past two weeks answering well-meaning white people’s, “but what can I do?” questions, try asking it of google first. Take accountability for your own ignorance and go educate yourself with the amazing breadth of articles, podcasts, and videos that are available. Read first-person stories of lived experience to learn what systemic racism looks and feels like.

Step three of your playbook, Liane…pivot. That’s what you tell people, once you’ve validated someone, made them feel heard, and then you’ve asked questions to try to understand, then you’ve earned the right to share your truth. You say that humans live by reciprocity and that once you’ve spoken their truth, they’ll listen to yours. That works most of the time.

It doesn’t apply to the conversations you’re having about race right now. Ten minutes of listening to a black person share their experience doesn’t quite get you to reciprocity after living 48 years of your life on the privileged side of systemic racism.

But saying nothing is a giant cop-out too.

Maybe what you should say is your new truth. Just say, “I’m grateful that you shared that with me. I’m going to commit to sharing your perspective with three friends who I think need to hear it.” That feels about right, your truth right now needs to be about action, and ownership, and doing something tangible to become an anti-racist.

In other circumstances, you advocate for being honest about the impact of other people’s words and deeds. If someone gets feedback that hurts them, you normally encourage them to say so with something simple like, “Ooof, that’s hard to hear.” You tell people that approach doesn’t detract from the feedback, or deny the other person’s experience, it simply signals that it’s going to be a hard conversation and that any efforts to tread carefully would be appreciated. That doesn’t work now either.

Right now, if your hard conversation is about race; if the feedback you’re getting is about how you’re getting it wrong, you should ditch the sharing of your feelings. Your feelings aren’t as important right now. Calling attention to your feelings is a redirect no one needs right now. Instead, go straight to validating the person who gave you the feedback. “My comments were out of line,” or “My words made you uncomfortable.”

I know you and I know you’re thinking that it’s not fair that your feelings don’t count and that we’ll only fix systemic racism by being fair from now on. Remember what your friend Tom Webster said, “When a system is biased, “fairness” doesn’t fix it. Fairness maintains it. Only “unfairness” in the opposite direction can rebalance an imbalanced system.” Tom is smart, listen to Tom.

One other thing I want to warn you about. You love to relate to people. When someone tells you a story, your first reaction is usually to share a similar story—not to one-up them, but to relate to them—to show that you’re on the same team. To show you’re an “us” not a “them.”

Be very, very careful not to do that right now. You’ve seen people saying that as a woman, as a queer person, as an immigrant that they can totally relate to being an outsider, to discrimination, and to hate. You have those tendencies too. You so desperately want to tell people, “I get it.”

Equating the systemic racism against black people to your own schemas of prejudice will not help you understand what’s different about racism against black people. Don’t try to relate. While it’s true that you have many things in common with your black friends, right now, those shared characteristics are in the periphery. Let your friends commiserate with you about parenting, or public speaking, or sourdough baking when they’re ready to focus there.

I hate to tell you Liane, but you’re gonna’ screw this up. At some point, if you’re keeping systemic racism front-and-center in the conversation so you can be a part of the solution, you’re going to say something that hurts someone, or makes them think less of you, or creates an emotional reaction. You might have to lose a battle to help win the war. It’s worth it.

What are You Learning?

What are you telling yourself about conversations about racism? Are you forcing yourself to stay quiet because you have nothing to add? Do you have something to say but are too afraid to raise it while tensions are running so high? Are you wading into discussions with a desire to learn? Have you already triggered an uncomfortable reaction from someone? Have you witnessed interactions that were less constructive than they could have been? What have you learned? I want to learn with you.